By Unknown - January 20, 2016
Greetings readers!! I'm back with another MV review! This post will be covering the last two music videos released by . . .

I will be sticking with the Drama versions only, because at the time I started working on this post (eons ago) Married to the Music had only recently been released and there was no dance version to compare with View. Expect a separate post comparing the dance versions in the future---if I can keep the real world in check. Anyway! These videos are interesting to say the least, so lets begin shall we?

Up first is 'View', SHINee's first MV since 2013's 'Why So Serious?'. Two years of waiting for their return was not spent in vain. SHINee always delivers when it comes to their music and music videos. Just watch the video for yourself before I go into my take on things.

I enjoyed this video, but I wish it had focused more on the dancing, or at least not had so many glaring back lights shining directly into the camera. The story of following the boys going through their rebellious young adult stage was a bit boring at first. but the more I watch the video the more things I catch. Quite honestly this whole MV was filled with themes I never thought the boys would even THINK of touching on.

What's the first of the peculiar themes you ask? Why kidnapping of course.

That's right the boys were kidnapped right off the streets. 5 woman, most likely Shawol Sasaengs who hail from Thailand, are magically able to waltz straight past security and approach the unsuspecting group during that brief moment of transition between venue and van. These girls are some brave ones I tell you . . . They don't even consider putting on their ski masks until AFTER they've already started chloroforming the group. I suppose though, that probably had something to do with the next theme.
~~~
~~
~
Seduction

There is no other explanation as to why the boys are so willing to just peruse Thailand without a care in the world. Either the girls laced all of the food and drink with drugs, or they created a super strong pheromone which was capable of making fools out of anyone who is unlucky enough to encounter it (note to self . . . must secure samples of that pheromone asap). Regardless on how--it's clear the boys have no intention of returning to their rightful place in the Hallyu wave as they continue to follow the Saesang 5 out of the woods and into the streets as they explore our final theme.
~~~
~~
~
Recklessness

with some pretty hardcore partying mixed in. Girls are taking off shirts left and right, and there is some angst between Minho and a stranger in the club. All the while they avoid anything that may tie them to their Idol life. Oh and lets not forget the massive amounts of trespassing these Thai woman drag the boys into. Doors are broken and pools are used without permission just to name a few things. Still, even with these themes the video is eye catching and entertaining to watch. SM Entertainment chose a fairly decent director for this MV, as they are able to effectively blend things between the drama and dancing.

I really do love this Music Video, Although, if I think about it . . . I would mainly contribute my love for this MV, in direct correlation with my love towards the song.

I love everything about this song. I really do. It's slow beginning with the piano synth and snare really draw you in all on their own, but then the chorus hits and it's ear worm central. I particularly like it when the chorus is easy to sing along with (either by it being in English or being phonetically easy to mimic) because who doesn't like being able to belt long with the song and not worry about if you are saying it wrong or not. The rest of the song really plays off the piano synth and bass beats and blends really well.

I haven't looked at the lyrics so I don't know if the song is really represented properly in the MV or not, you're gonna have to forgive me on that. Why? Because, 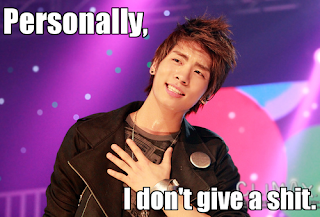 I know I know . . . Why would I ignore SHINee's hard work and not look at the lyrics? Well mainly because, unless I'm extremely curious on what a group is trying to present, I typically don't care. To me the appeal to Kpop (and foreign music overall) is the ability to not focus so much on what the artist are saying--instead, focusing in on their actual music. But I digress
~~~
~~
~

If the 'View' Music Video was SHINee going through their rebellious stage, drinking and partying then the 'Married to the Music' MV was--well . . . just watch it for yourself.

The only conclusion I can come to is that when the boys were drinking and partying whilst they were perusing Thailand with their sasaengs fans in the present. SHINee was clearly not satisfied enough and has moved on from simply going through their rebellious stage into strait up chaos. They travel back in time (sometime in the 80's) and start experimenting with drugs . . . I mean what else could they possibly be doing in a video this bizarre?

No, seriously, this music video is fucked up. It starts off innocently enough with the boys just walking on screen holding Jonghyun up in such an odd manner that it could not have been easy to get into that position (seriously does he leap up into Minho's arms then start to plank?) The house seems to be empty, and it is for 30 seconds, but sadly nothing is safe and things start to get weird reeeeally quick.
Apparently this glowing tonic of doom, that a mysterious woman in a veil brings them, was not enough a warning of what was to come. Against their better judgement they soon drink the strange concoction and the house instantly turns into a wild party. Complete with total strangers just dancing it up. The boys are confused at first (as well they should be) but that does little to stop them from continuing to drink the strange glowing tonic.
Thanks to the woman in the veil (who I henceforth dub evil bride) the group begins to play an equally evil Spin the Bottle game. After each turn, a member has something bizarre happen to them. First up, Key--poor Key gets forced onto a spinning wheel where the evil bride has his head chopped off. At this point all the members have taken enough of the glowing tonic of death to not really care, so they spin the bottle again.

It seems like Onew is the next victim, but our shy leader doesn't want it to be his turn. Instead, while playing a impromptu Pinata session (with an invisible Pinata), he bashes Taemin in the back of the head forcing him to lose his eyes, the Bottle though is not happy that Onew skipped out on his turn. After more drinking--a tipsy Onew wanders into the bathroom were, after attempting to sober up by placing his head in a sink filled with water, the Evil Bottle gets it's revenge and Onew is missing his nose.
I also found it extremely amusing that Taemin and Key were bumbling around in their deformed states. Anyways, more drugs are being passed around in the form of techno-color cookies. These cookies have got to be more dangerous than any drug laced food out there. Why? Because it causes Jonghyun and another woman to puke confetti into the air. Ok fine . . . he pukes up confetti, whatever.
The really strange bit is that everyone gets super excited over this puketti and starts grabbing for it like it's candy or something extremely precious. Finally Evil Bride gives up on using her evil bottle and instead focuses on our remaining two members in a more direct manner. Jonghyun's lips are taken after he is kissed by the bookshelf, after which Evil Bride decides to place his lips in a bowl of sprinkles. Why? Because that's what crazy people do when they are impatient.


seriously . . . the judgment I had against this woman was strong

Right . . . so I'll just tack that onto the the evidence board that SHINee has been regularly taking hallucinogens throughout this video. Unfortunately for the boys, I've come to the conclusion that SM Entertainment thought they didn't have nearly enough crazy on their plates, because only Minho is left and they just decided to just up and burn him.

Well at least he's living up to his nickname and if you don't understand then clearly you're not a Shawol.

I'm happy to see that SM Entertainment is being consistent with this song and MV. The song is right out of the 80's with electric synth beats, keyboard cords and choir backup singers all of which was flawlessly mixed together with an nice subtle undertone of cowbell. Plus it's got a horribly catchy hook, conveniently in English . . . which certainly doesn't make things any easier if you are trying to not have a song stuck in your brain for days on end.

The only thing I have an issue with between the song and MV is that I can't make heads or tail of the MV plot so I had to look up the lyrics . . . I know ,I know--I just said that I generally don't care about the lyrics, but this video was so ridiculously messed up I absolutely needed to see what the song said so I could to try and attempt to justify what I just watched.

Here are the color coded lyrics (thanks to colorcodedlyrics.com) the member's colors are as follows; Onew, Jonghyun, Key, Minho, Taemin, everyone


Right, so I suppooooose this makes sense with what was happening on screen . . . //eye roll// it's songs like this that drive me to ignore the lyrics when new songs are released.


Well, regardless on SM Entertainments peculiar artistic styling while they planned these videos, the boys did great. It was clear they were having fun and the songs themselves really do grow on you. If you haven't had a chance to watch or listen to these songs yet, you should really do so. They are worth a single listen at least.