Wow . . . it's been so long since I've done a review. And honestly I didn't think this group would be the one to bring me back to even doing reviews. So, in case you were not aware--I'm not a huge fan of girl groups. Even the groups I "like" are groups I'll only buy MAX one or two songs from their albums, and even then 4MINUTE wasn't even near the top of that list.

I'd read in passing that they had won 1st place on a few programs for their song 미쳐(Crazy), so my interest was piqued . . . boy am I glad I listened to this song. Do NOT (I'm looking at you Aunnie) for the love all things Hallyu, judge this song based off the music video alone. I'll go into more specifics below, for now just watch (or listen) the music video.

The video is--very--visually . . . stimulating, to say the least. Hyuna is on top of her sex vixen game and Gayoon, Jiyoon, Sohyun and Jihyun are not to be out done.  Each girl gets their own "ooo look at me I'm dancing like a slut" moment, though some of them are a much more toned down than others.

Honestly though even with the excessive hip movements, the group as a whole don't really have the most "sexy" moments, I'd have to give that award to the background girls and their desperate need to have their asses up and in everyone's line of site. 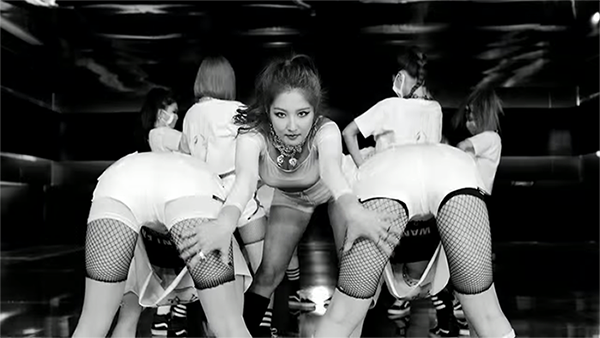 But enough about that, the parts I really enjoyed were the little tweaks the editors added into this music video. Particularly the specifically highlighted colors  in a sea of black and white, and the great video ghost frame effect.

I also really like the fact that the dancing, while obviously designed to make the male population suddenly find the need to use the bathroom, was totally in sync with the music. And no other member did that best than Jihyun during her solo towards the end of the music video. Her dancing, as smutty as it might have been, was perfectly timed to match the beats of the song.

Good God, I totally LOVE this song. This song is littered with ear worms that will have you moving and grooving long before you can finish listening to the whole song for the very first time. Seriously the more I listen to the song, the more I'm loving the beats they laced throughout the whole song.

Obviously I love the beats and the actual background track to the song. Now lets talk about the girls . . . as I have traditionally done in the past, I'm listening to this song on repeat. All the English that is used throughout the song is pronounced extremely accurate for a Kpop group. Then to top it off they did a great job breaking up the song so each member has a definitive section. As I've mentioned above, 4MINUTE is not a group I listen to on a regular basis. So, naturally I am unable to pick out each voice and place names to them. That being said--what I can tell is that the group is making an effort to not have a single member //cough// Hyuna //cough// remain the sole focus of the song. Case and point--everyone gets to have a moment to shine all on their own before they regroup for the chorus.

Oh! speaking of the chorus. I love how they used the saxophone. Actually, if you listen closely you can hear that they utilize the saxophone throughout the entirety of the song . . . and that's in addition to the typical keyboard, drums and guitar you expect to hear.

This is an awesome song with (sadly) a very typical music video. Even if you don't particularly like girl groups, this song is at least worth giving a chance. It makes complete sense that the group has won so many music shows due to this song.