Fall in Love with Me: Episode 6 [Recap]


Last week our leading couple shared a romantic amusement park play date and quite the steamy sick day afterwards and it all led up to a very serious question: "Can you close your eyes for a moment?" Omo, those are kissin' words, my friend! However, in this week's episode, it seems that Tian Xing will finally realize where it all went wrong... 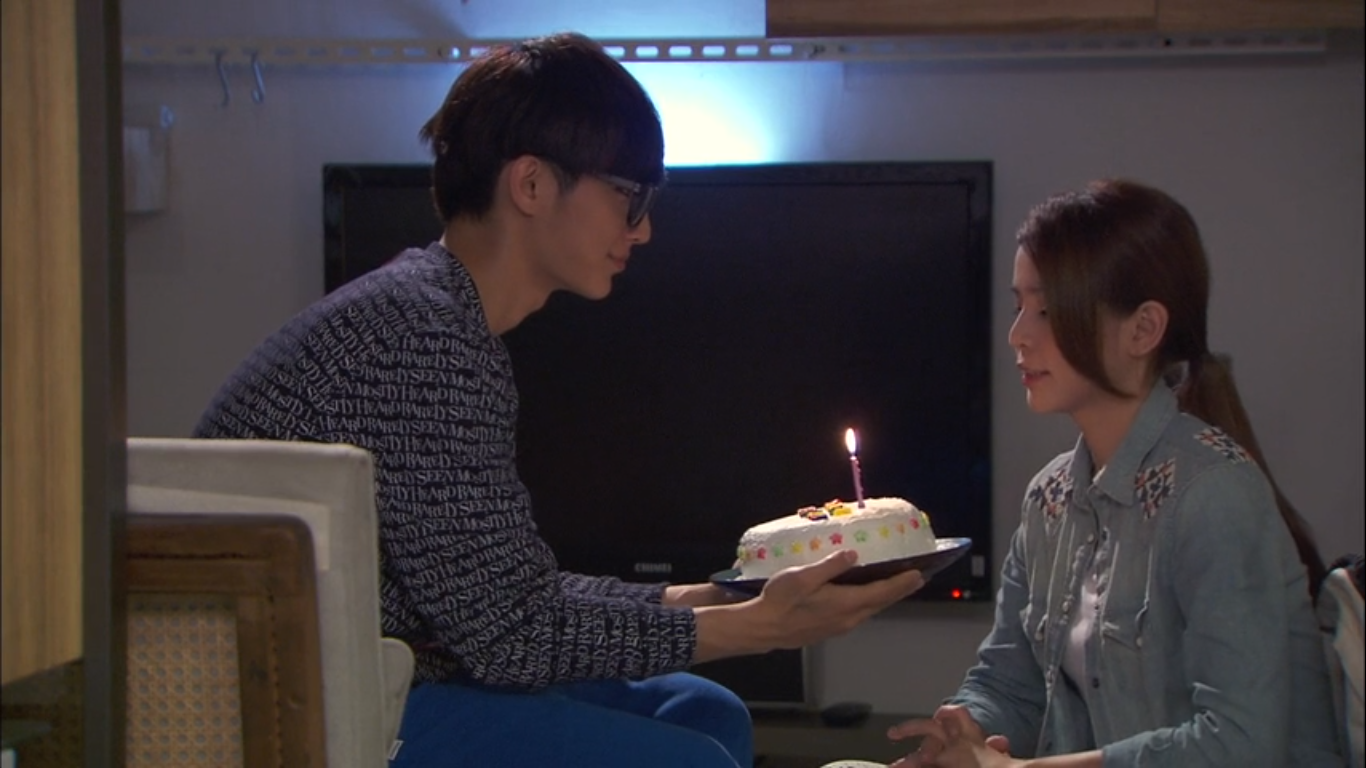 Aunnie: I would have preferred a kiss buuuuut, this'll do cause it was extremely cute.

Firnlambe: Agreed, I'm disappointed there was no kiss, but at the same time im ok with how adorable this scene turned out to be.

Wendilynn: I think she was also expecting a kiss. lol 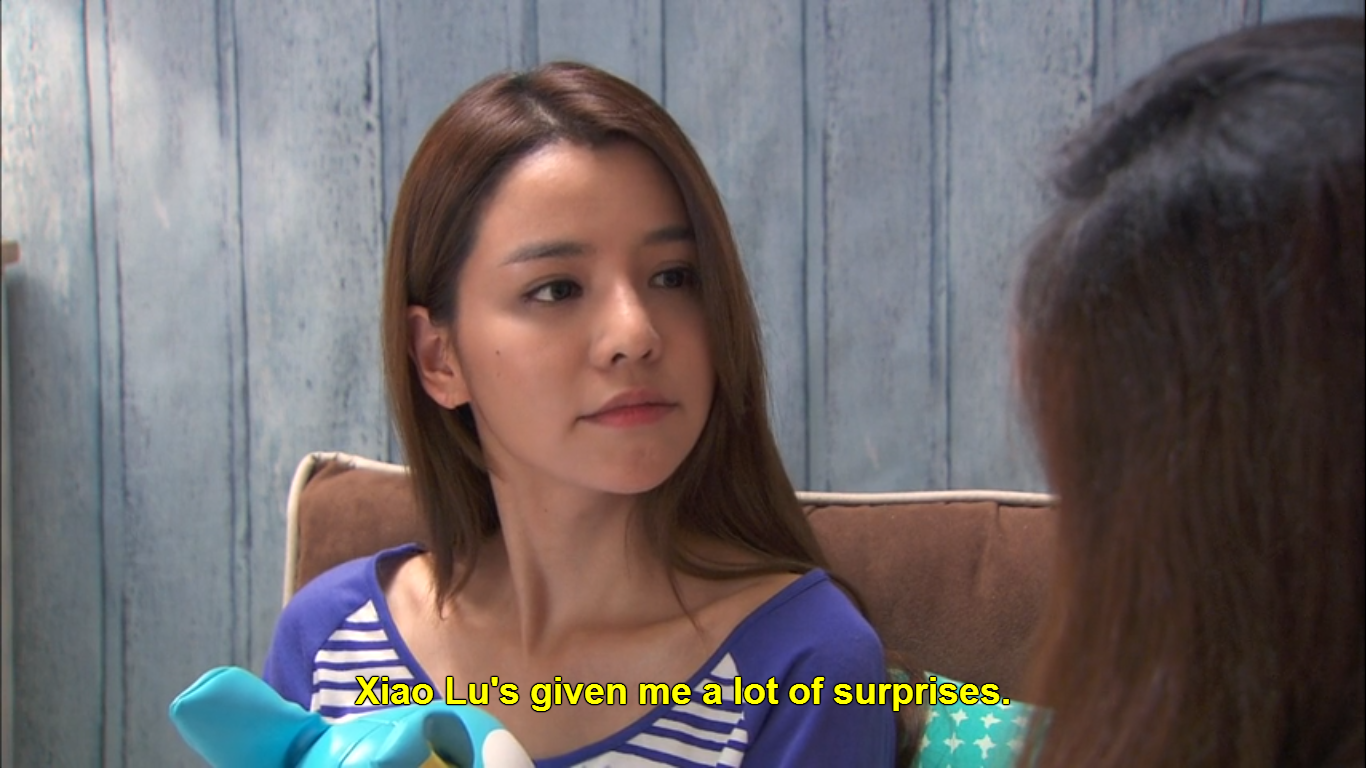 Aunnie: I surely hope Tian Xing is paying this man what he's worth, seriously . . .

Firnlambe: I would probably pay him more than that . . . Uncle Fu is awesome . . . but not nearly as awesome as Aaron's face in this shot.

Wendilynn: I love Uncle Fu.  He usually plays some awesome characters.  I also love Aaron's faces.  He's got some great expressions in this drama.  He gets to be so expressive in this one. 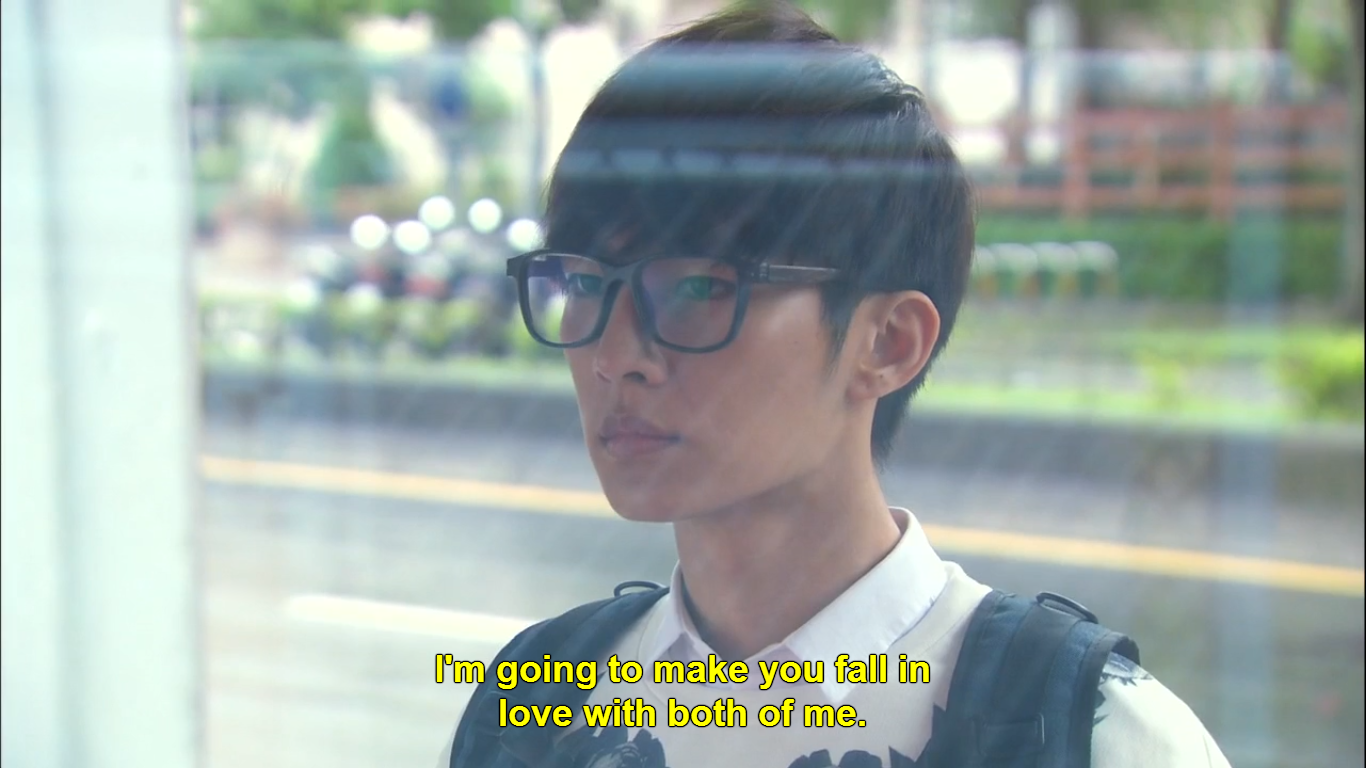 Firnlambe: That is gonna be a tough, tough battle my friend. No only does your real self drive Le Si up a wall . . . this "fake" persona you created (I'm convinced this is his true self) keeps landing yourself in situations where you continuously have to lie to her. When she finally finds out the truth, things will get infinitely worse before they get better.

Aunnie: Here's my problem with this whole statement . . . making her fall in love with two seemingly separate people will 1) make her feel like a dirty cheater and 2) liable to make her crazy and depressed because it's really frustrating to be in love with two people. Men . . . they just don't think things through.

Wendilynn:  I'm glad they've finally tied in what this drama was supposed to be about.  I couldn't quite get how the title fit what was happening so far.  He has a very long uphill battle to fight.  I agree with Firnlambe that his fake persona is his real personality and Aunnie has a point, Le Si is a loyal and upstanding girl,  loving two men will be uncomfortable and unpalatable to her. 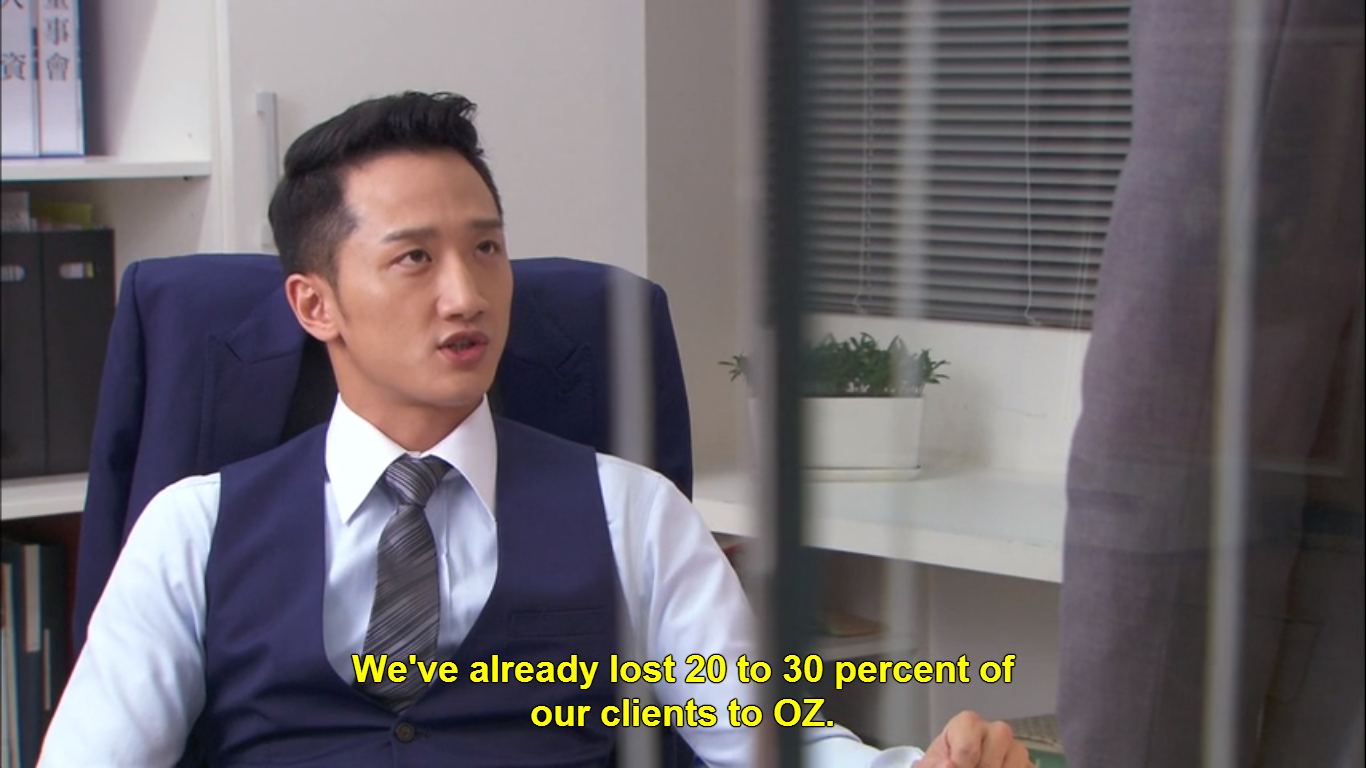 Firnlambe: I knew he'd been too quiet recently.

Aunnie: *Unconsciously falls into Devil's Advocate Mode* That's.....that's a huge amount of clients....from a business stand point, I can totally see why he's the bad guy. 20% to 30% is a huge loss....

Firnlambe:  . . . . WOMAN!!!! Stop picking fights with gravity when its obvious you're going to lose each and every time. *Aigoo*and the trips keep getting more and more pitiful each time. ::tsk:: Seriously, she should win an award for the most conveniently timed trips into her leading mans arms.

Aunnie: Not going to lie, I'm done with the tripping cliche in this drama . . . she's a black belt for god's sake, how has she not learned the art of stability on her own feet??

Wendilynn:  Yup, the cliche is getting old. 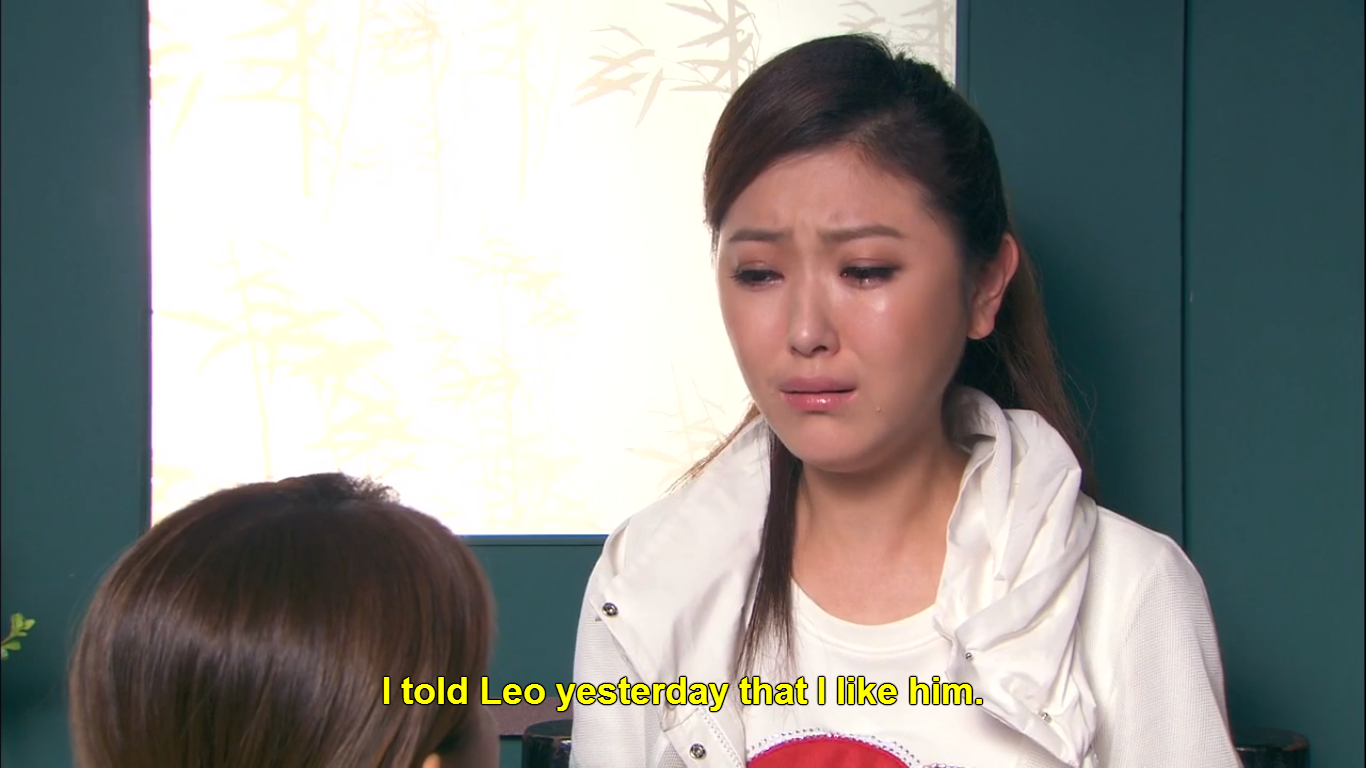 Firnlambe: Ok, she could have timed her confession a little better. It's obvious Leo is still pining over Le Si, you need to give the man some space. Although you do gotta give this girl some credit, not many people would take the first step like that and admit to liking someone . . . I know I wouldn't.

Aunnie: Oh, I absolutely LOVE that she confessed her feelings! Can't all female characters--and I guess male for that matter--be this straight forward. Sure he rejected her but at least now she knows! *Applause*

Wendilynn:  He didn't really reject her, but he didn't accept her either.  Now that he knows she likes him, maybe it will help him see that he has no chance with Le Si because she's not about to date someone she sees not only as her brother substitute, but who is claimed by her best friend. 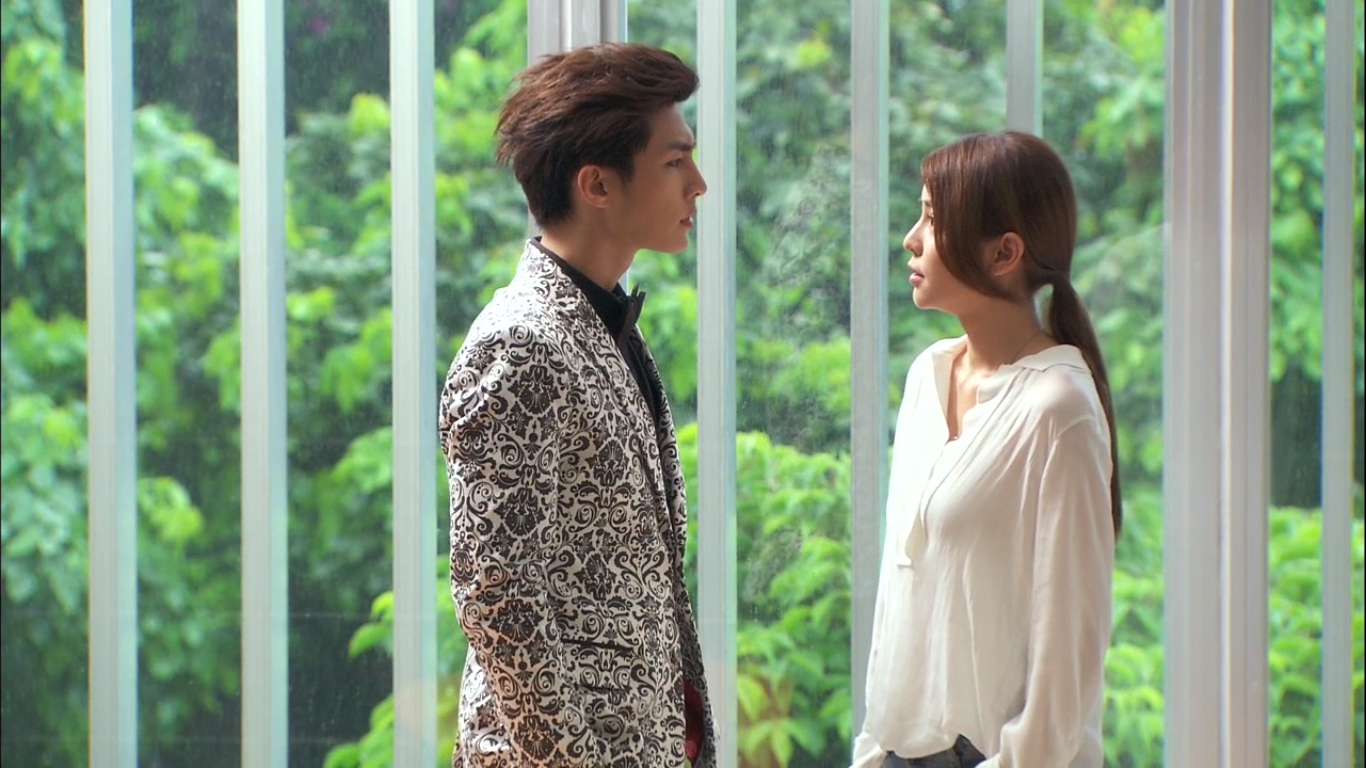 Firnlambe: This had to have been difficult for Tian Xing. Not only was he rejected, he was rejected because Le Si loves his made up persona. Talk about being jealous of one's self.

Aunnie: I'd like to feel bad . . . actually, I do feel bad but I can't help feeling like he brought this on himself. It'd be sweet if she'd fallen for each persona at an equal rate but...she's a one person kinda gal and she doesn't strike me as a cheater so I'm kind of glad she's as adamant about not liking Tian Xing as she is, considering her feelings for Xiao Lu.

Wendilynn:  I thought he pushed it way too early. He's spent all this time pissing her off to get her to be brave.  Just because he likes her doesn't mean she's going to change her mind so easily.  I'm glad she confessed to him about liking Xiao Lu, he needed a reality check. 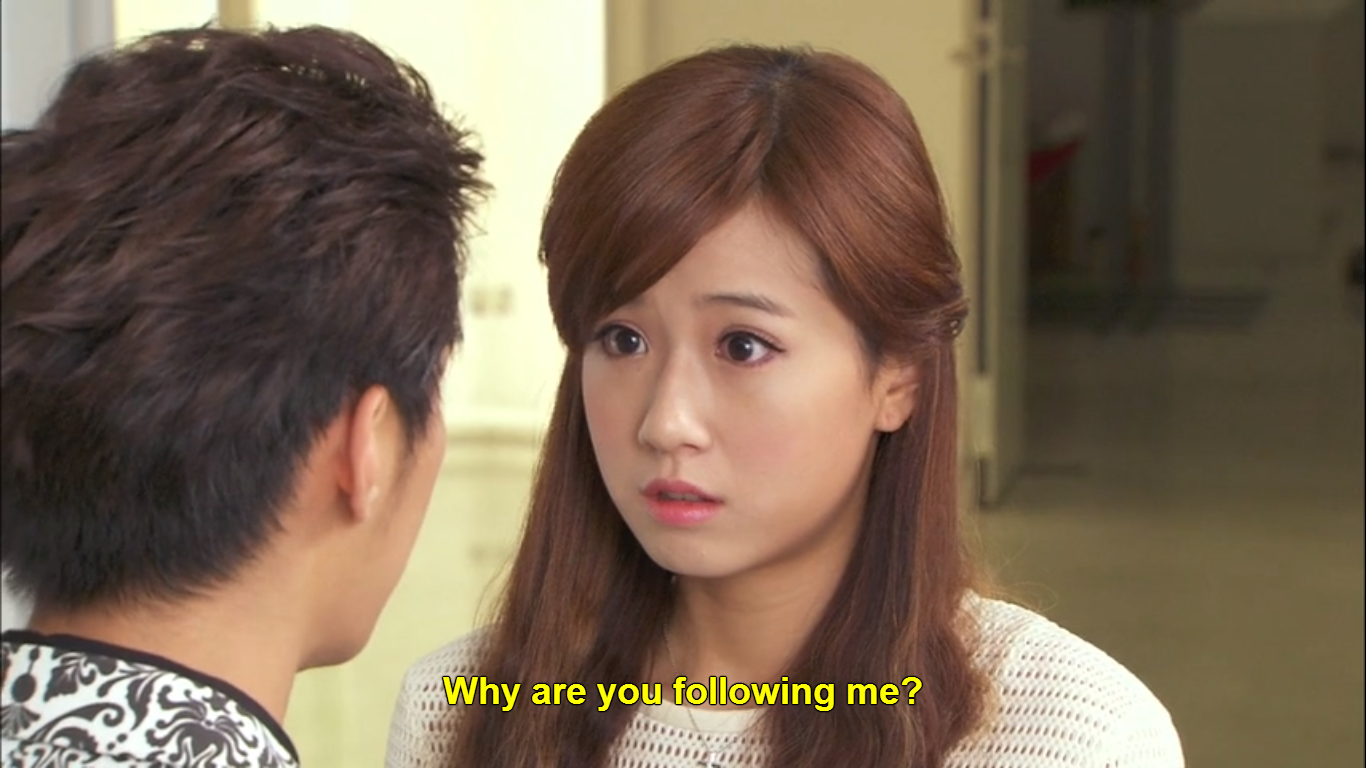 Firnlambe: This was a pretty harsh eye opening experience for her. Poor girl probably had never seen Tian Xing's real feelings through those rose tinted glasses I'm sure she's been wearing, I almost feel sorry for her . . . . but not enough for me to stop being annoyed by her.

Aunnie: At the risk of sounding like the odd woman out again, I really like her character. And I felt like this was out of line of Tian Xing. I know, I know...I'm a terrible person but in my eyes, he seems to never have actually sat her down and told her "Look, no chance, hmmkay? Glad we talked this out." Instead, he's humored her, and attempted to keep her at arms length and then to just EXPLODE on this poor, naive child...it was WAAAY out of line. Besides, she's like 10 years old and doesn't realize that her "love" for him is just affection and the fact that he's an incredibly handsome man....

Wendilynn:  I don't feel sorry for her.  She acts like a 3 year old and ignores anyone elses feelings but her own.  He had to get harsh for her to realize that she is not getting anywhere.  I mean, come on, she thought it was okay to take his key and make duplicates.  She may have a crush on him, but she isn't actually in love with him.  She just wants to own him. 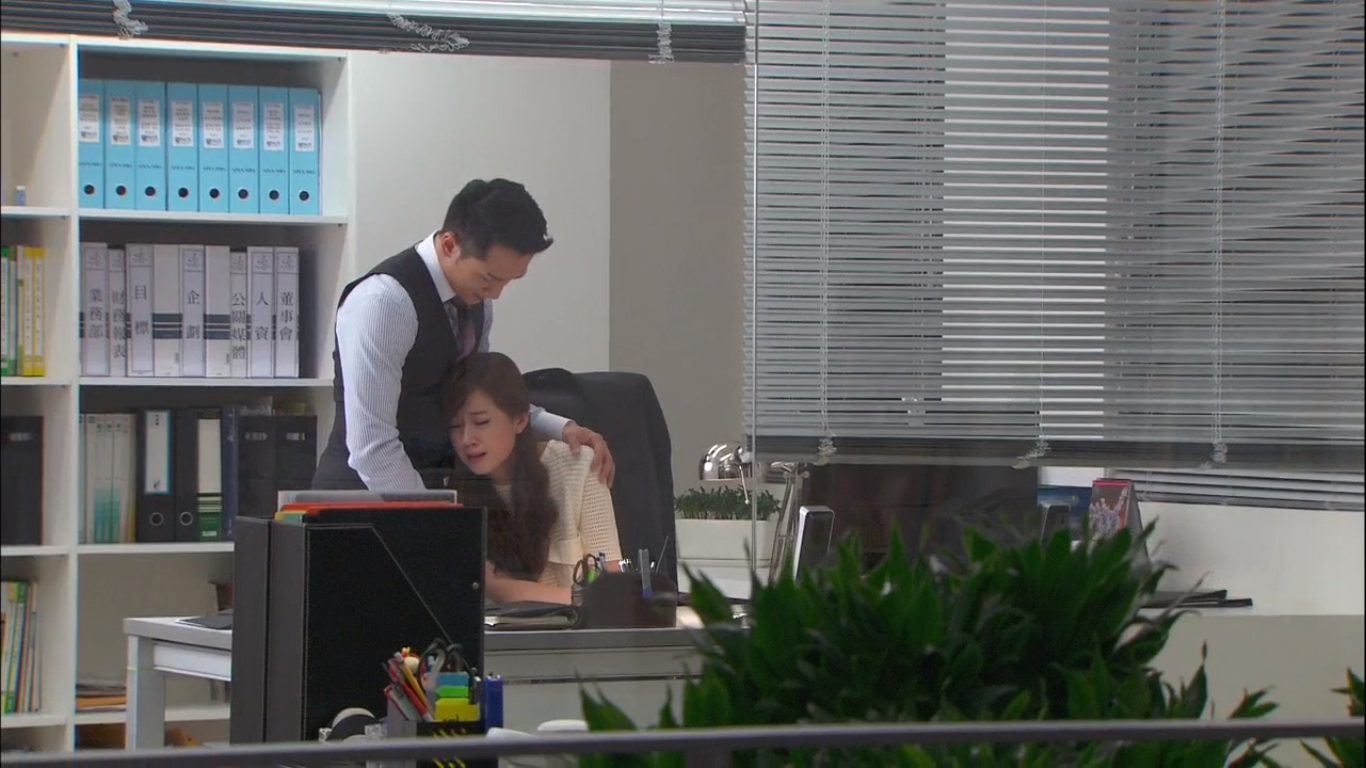 Firnlambe: Awwww Lance has a soft side to him. Too bad it doesn't extend to anyone not related to him . . . Jerk

Aunnie: *Cracks knuckles before touching keyboard* Yes, let's discuss this scene, shall we? Nothing, and I mean nothing short of killing Uncle Fu or perhaps Le Si's mom--maybe not even then--will cause me to hate this man. This scene basically made everything he'll do in the future okay for me. I know, I know, I'm a terrible person. But seeing this side of Big Brother (#2) literally made me tear up because he obviously has a conscious and his heart isn't as cold as ice like most Kdrama/Tdrama bad guys who gleefully care about nothing. I.Love.Him. I apologize for nothing.

Not the way to go around winning the love of your life's heart. Do you want her to hate you forever?!?! because if you continue pulling stunts like this that's exactly whats going to happen.

Aunnie: Oh...I love kisses like these cause I'm all about the dark and twisty *day dreams about Coffee Prince kiss scene*...but even I had to say "Oh...that will get you nowhere with Le Si besides a kick to the gonads" and guess what...I was wrong about her being a slapper, huh?

Wendilynn:  Forcing a kiss does NOT convince the girl you like her, you big jerk.  I don't care how frustrated you are.  Talk about sinking ones chances.  With their more conservative dating practices, this almost counts as raping the poor girl.  Talk about stupid. 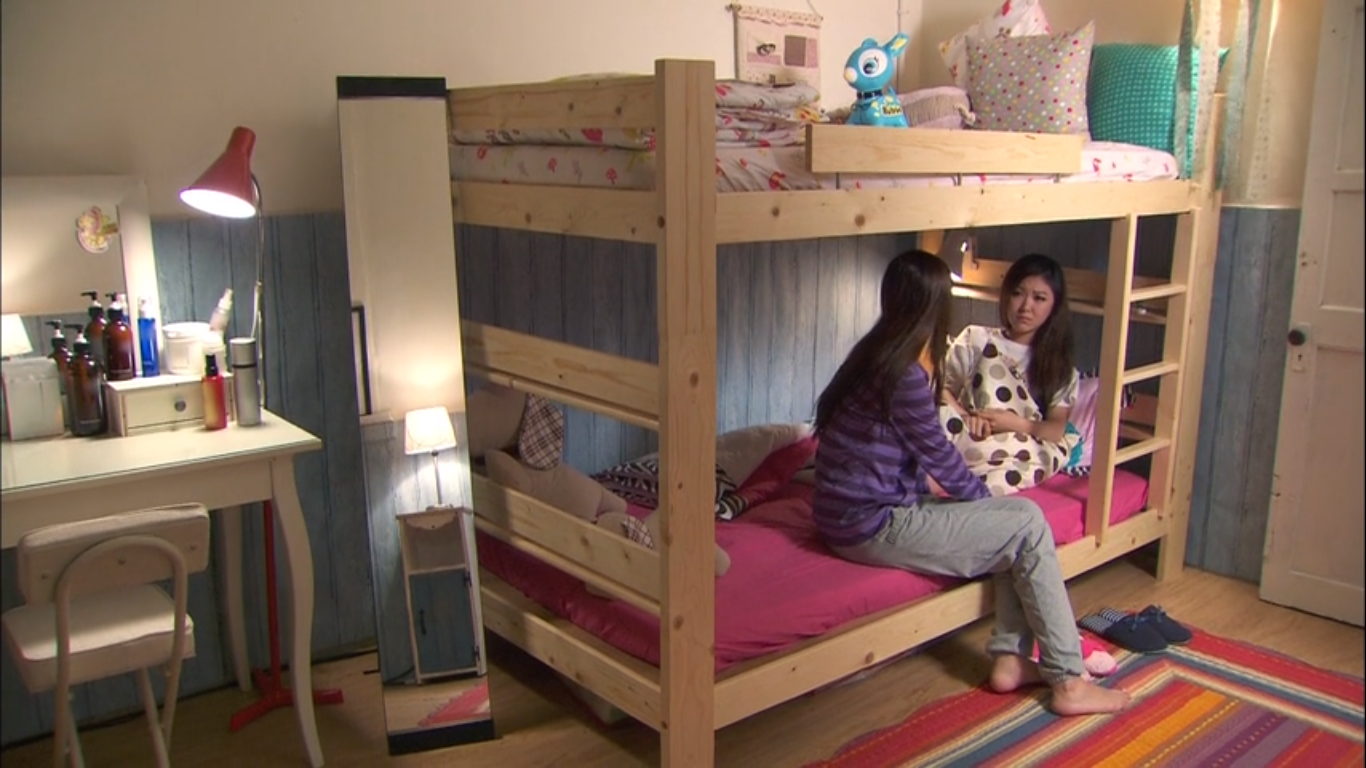 Aunnie: Soju. Or whatever Taiwai's equivalent is, is missing in this scene. Eff the chocolate, Eff the tears and Eff the kind and caring pats on the back...alcohol, straight up, is needed here.

Wendilynn:  When life is confusing and going to hell, a girlfriend to cry with is always a good thing.

Firnlambe: Agreed, and both these ladies need a solid support system. Thankfully they have each other, so they won't become completely closed off to those around them. 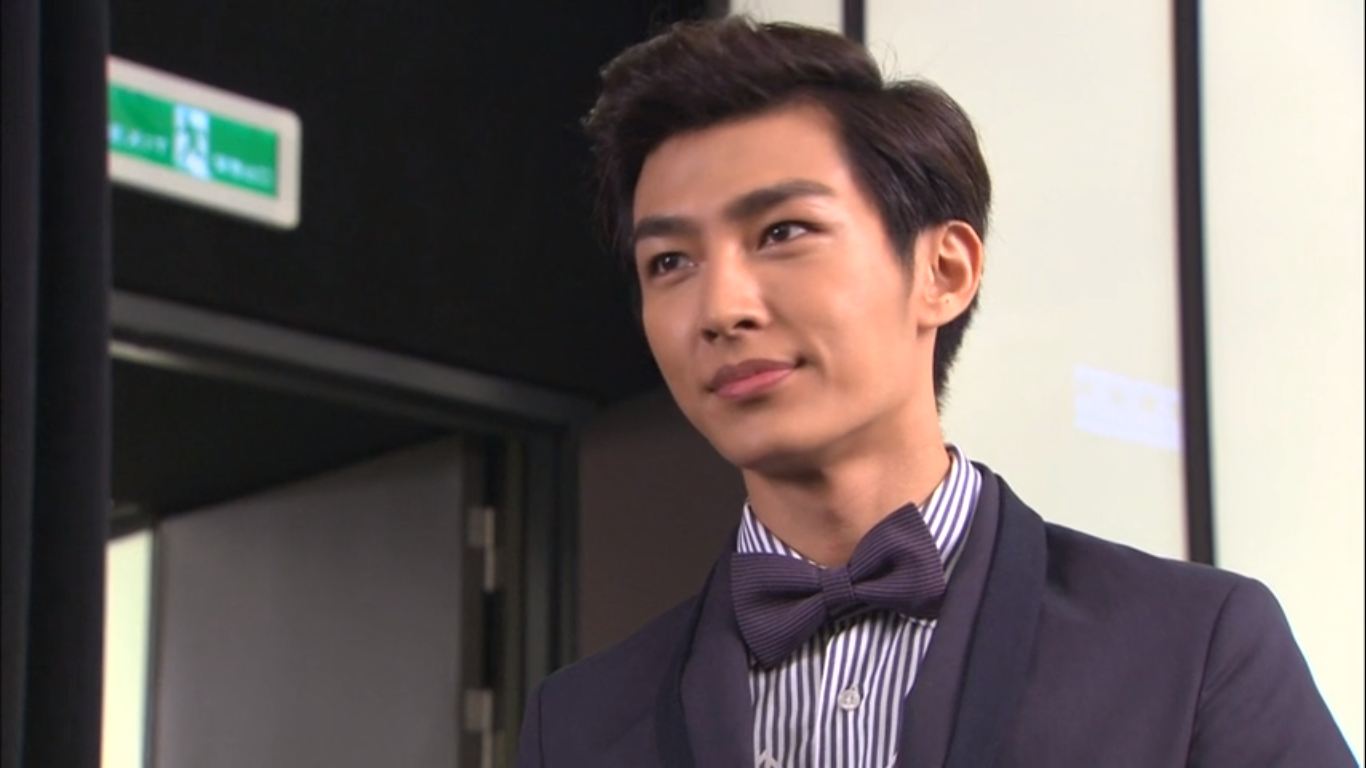 Firnlambe: First, that was the fastest dash to a store and sub-sequential clothes change I have ever witnessed. I did however love that the clerk looked at him like he was some alien when this, seemingly broke young man, promptly ignored his presence and started changing after whipping out his black no limit card. And then second, how is he planning on explaining where Xiao Lu went and why he's there instead. Also! how will he explain how he knows the product and ad theme when hes supposedly "just seen it"?

Wendilynn:  I thought this was so unrealistic.  Who has time in the 2 minutes you're called into the office for a quick stop to a high fashion store to pick out an outfit, fluff your hair and come back as the asshole to save the day?

Aunnie: Taking into consideration that Kdrama/Tdrama's have really convenient time-warps, I just want to say...this was inCREDIBLY stupid of Tian Xing. There IS no explanation for the disappearance of Xiao Lu. In fact, if this girl doesn't start to make things click on the next episode, I will consider her character to be as dumb as rocks. This is...no. No explanation could ever explain why this happened.
Whoa! Talk about one step forward and two steps back, Tian Xing! This week's episode had way less sexual tension but the same amount of feels. Looks like Tian Xing is finding it waaay harder to get Le Si to fall in love with his real counterpart than his fake persona and it's presenting a problem. But what about that preview? Tears at the beach, a black tie advertisement party and a new character to hate. Does anyone else get an "ex-boyfriend" vibe from him? How does Tian Xing wiggle his way into Le Si's heart and why was Le Si crying? Let us hear your theories on next weeks episode in the comments below and tune back in next week to find out just what exactly Tian Xing has planned to save the Samsung meeting!


Want more from our makeshift Fall in Love with Me​​ Drama Club? Check out our individual blogs or get in touch with us via Twitter!