After a 2 year hiatus, BigBang's mankae is back! Personally I'm not a huge BigBang fan . . . but I also don't hate them. That being said, I do really like the few solo songs I've heard from Seungri. So here are my thoughts on his latest and first full album. 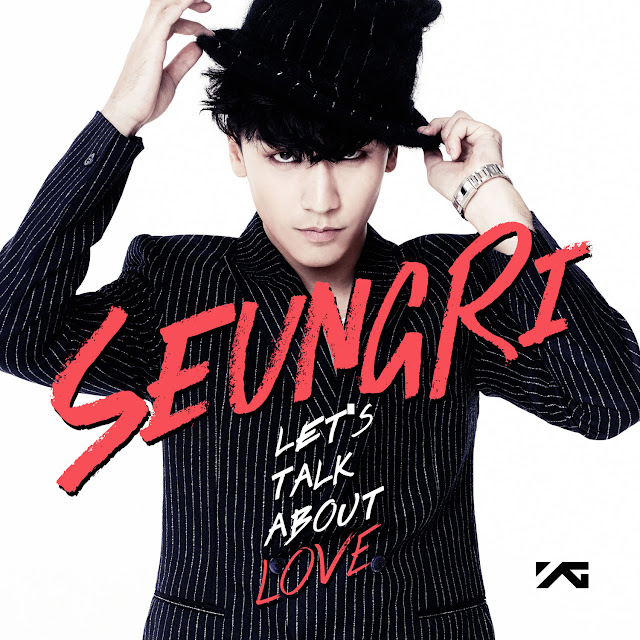 Ugh, right off the bat I can tell this song
will NOT become a personal favorite from this album.
The repetitive beats behind the "Lets Talk About Love" chorus
reeeeeeeeeeeeeeeeeeeeeeeeeeeeeeally grinds my audio receptive nerves
. . . . .
BUT! The verses and the sheer fact that
Seungri took on a major part in the development of this CD
(he produced the entire album and wrote most, if not all, the lyrics)
makes it extremely difficult to give this song 1 star.
Plus both G-Dragon's and Taeyang's verses are catchy and easy to listen to
. . .
so much so, that I'm able to look past some of the English words
they decided to incorporate into their lyrics.

so, overall this song is defiantly one you'll either
LOVE it / HATE it / or you'll be like me,
and hate certain aspects of the song,
but thoroughly enjoy other portions just fine.
The choice is yours

This was more like what I was expecting to hear from Seungri.
Strong electrobeats, powerful vocals, and a suuuuuuper catchy chorus
(unlike that monstrosity from "Lets Talk About Love").
Now, while this particular track may initally seem like it should be classified as a slow song
. . . .
which it does seem to be, when based solely on Seungri's vocals,
I feel that he was able to blend the slow steady vocals seamlessly
with the electrobeats that are laced through-out the entirety of the song.

This is also the track that was chosen to be represented as a MV.
I strongly suggest that you take the time to watch this MV (listed below),
it really captures what Seungri was trying to express during the song
. . .
plus, as an add bonus they add this
wicked techno section after the song technically ends.
I'm fairly sure it's an excerpt from the CD only track,
which happens to be a remix.

Right away I was drawn to the piano/percussion intro.
It has such an uplifting vibe to it, that I can't help but love it.
Same with the verse, I can't help be drawn to it.
And then the chorus kicks in
. . .
Holy Crap!! I thought "Gotta Talk To U" was catchy,
boy was I unprepared for this.
It's probably even more repetitive than "Lets Talk About Love" 's chorus.
Though, strangely, "GG Be" doesn't grind my audio receptors the wrong way.
I've come to the conclusion that the background tracks
are what makes it or breaks it for me during a repetitive chorus.
The next few verses are just a enjoyable as the last, and then Jennie Kim starts singing
. . .
this girl has some serious potential,
I don't usually gravitate towards the female artists within the Hallyu-verse,
but I'm actually looking forward to seeing who she eventually debuts with
(who knows she may even be a solo artist).

The only part of the song that
I was disappointed with, is the ending
. . . . . .
It just fades out, no solid end to the song.
The chorus just repeats while they fade everything out.
It's actually a little bit of a let down,
but this isn't enough of an impact to take away from my over all scoring.

Well, this song is definitely
one of the "slow" songs in this mini album.

The intro is a tad bit annoying,
but it's quickly over and you get right to the heart of this song.
I personally really enjoy the subtle piano rifts
playing behind through out the entire song.
It gives everything more depth,
and lets things break away from the stereotypical
"hip-hop" vibe it would otherwise have.
And then, to give the song even more reasons
to show the world its likability
. . .
the chorus is, yet again, easy to sing along too
(even if you cant speak Korean).

Actually
. . . . .
now that I think about it,
this whole song is very easy to sing along with.

This track is sure to grab your attention right away,
particularly if you enjoy more songs with a quicker tempo.

The verses are blended quite well
considering there are many synthetic beats intermixed with the percussion.
And the chorus is . . . again extremely catchy and easy to sing along with.
(I see a pattern has started developing with Seungri and his chorus' through out this mini album).

"You Hoooo!!!" is probably my favorite track off this whole album.
And that's more than likely due to the fact that
its a face paced song that didn't have to
rely "heavy rap" sections to survive
. . . . .
well, that and I find it quite fun to belt out
"You Hoooo!!!"
during the chorus ^-^

Well, we've reached the final track for this mini album,
and it turns out to be another "slow" feeling song.

It is relatively easy to listen too though,
and it's yet again fairly easy to sing along with.

Personally I think this track
is more fit for a sleep playlist than anything else.
Seungri's voice just carries a particular calm while singing this track.
It' s easy to just listen and forget what's going around you,
that's something you won't hear from any other songs on this album.

I feel that this was money well spent,
my only regret is that I only purchased
the digital version of this mini album
so I cannot give you my thoughts on the remix.

But, as an added treat, the following videos
are a few interviews regarding his second solo album
Enjoy ^-^

Making of the 2nd mini album